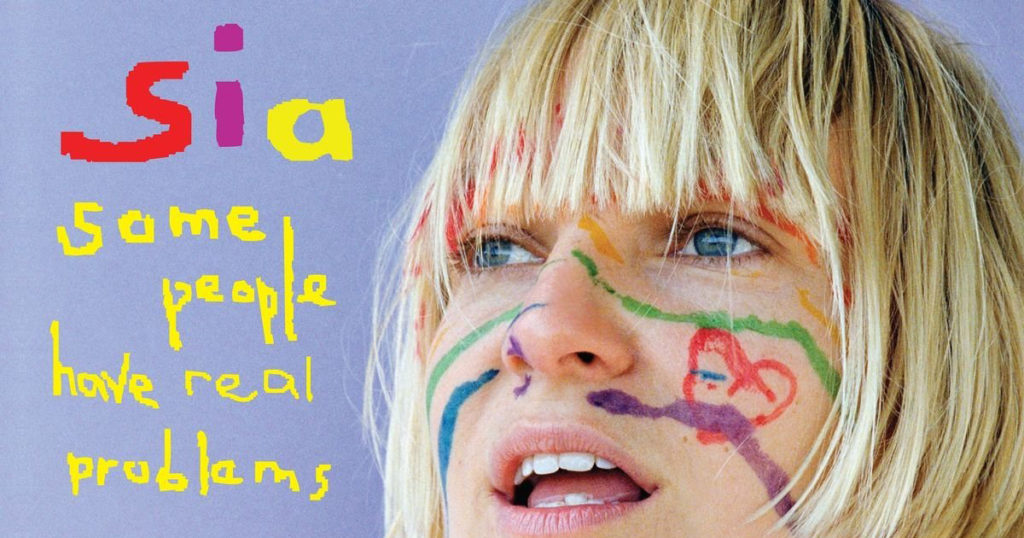 Sia Furler would probably be the first to agree that she often wears her heart on her sleeve, and puts it out there in her music — her vulnerability being the source of her overflowing soulfulness, both vocally and lyrically.

After rising to prominence in 2001 as one of the stand-out vocalists in the UK downtempo group Zero 7 ‘s ever-changing lineup, Sia launched a successful solo career. Her debut full-length, Healing Is Difficult (2002), garnered rave reviews, but it was her second solo outing, 2004’s Colour The Small One, that would firmly establish the Adelaide born singer/songwriter as a force to be reckoned with, the track “Breathe Me” being forever etched in the minds of many as the haunting song that played on as the cast of the HBO series Six Feet Under took their final gasps (click HERE to view).

While Sia’s first two albums dealt with the turmoil in her own life, her third album, Some People Have Real Problems, released today, makes strides both musically and emotionally. Having moved from England to Los Angeles, and found a partner she cares enough about to convert to Judaism for, Sia has finally found herself on the road to happiness. The singer talked with me about her introspective journey, which led her to dabble in both Buddhism and Scientology.

Nicole Powers: I’ve noticed that throughout your solo work, you’ve used your albums for therapy. Is the same true of this album?

Sia Furler: Yes. Yes, it’s a note to self. I’m getting a bit rich now, and I might be getting a bit famous, and I need to make sure that I don’t lose touch with reality. While we complain about our bourgeois problems like bitter coffee, and things like that, there are people who don’t have a mum, or legs, or rice. You know, some people have real problems.

NP: So that may be some kind of progression, because the last two solo albums…

SF: Have been totally self-indulgent.

NP: Well, not at all, because they’re beautiful to listen to too, but I guess from a personal point of view this new album is up a notch on the happiness scale since you were able to take yourself out of yourself.

SF: Yes. Although when I’m writing I don’t ever think I’m writing about me. I think I’m writing a story or a notion. I’ve always thought it was about observation, or my friend’s lives, but then sometimes I have to admit that that may have been about me at the time and I wasn’t aware of it.

NP: Take me through some of the songs on the new album.

SF: Well for me lyrically the most fun one was “Academia”.

SF: That was so fun because that literally just vomited out. Then, after I’d written it, I then had to go back and do the research, make sure that the semantics were right. Really, that’s a song about when you’re not getting your needs met in a relationship. You’re not getting any love or affection, you’re just getting palmed off with words. I guess it’s when you’re in a relationship with an intellectual, and it’s just totally cerebral. There’s no feeling or warmth. I think I had a bit of that experience with my stepfather because he was a judge and he was very intellectual. He wasn’t very warm, and I could remember basically I was metaphorically tap dancing for him for like eight years hoping that he’d notice.

NP: And then you came to a realization that you didn’t need to do that?

NP: So how long ago was that?

NP: But those things don’t leave you.

SF: Well, you know, I think I’ve dealt with it. When I told you about it, it didn’t make me feel sick in the guts.

NP: It just made you write a great song.

SF: Yes. You can’t throw a dictionary at someone when they need a hug.

NP: Aside from “I Go To Sleep,” which is cover of a song made famous by The Pretenders, are all songs on the album written by you?

SF: Me and other people, because I don’t write by myself. I’m no good at it. I’m not disciplined. Someone else has to be in the room, just to get it going.

NP: Like having an appointment at the doctors so you’ll go.

SF: Yes. Like we start at midday and finish at six. And with some people a song can take less than twenty minutes to be done. It’s like channeling.

NP: You say it’s like channeling, where do you think it comes from?

NP: Do you have any kind of belief system?

SF: I guess I think more than anything I believe in creating your own reality. But I’ve dabbled in loads of things, Buddhism, Scientology. I’m trying out Judaism now because I’m dating a Jew. I’ll leave no stone unturned. Sometimes I like boys, sometimes I like girls. I’m not one to let belief or gender get in the way of a good conversation.

NP: So what would you say you’ve taken from Buddhism?

SF: I guess the peace element. You can’t control anything so you have to learn to be able to experience everything, and just breathe through it.

NP: And the same question for Scientology?

SF: I think a lot of it is very similar, like that whole ‘only do things to other people that you think you would be able to experience easily yourself.’ They’re also heavy on the communication, on telling the truth and being above board, and really being as direct as you can be. And the main thing, which is their greatest teaching, is not suppressing anything, saying everything, getting it off your chest. That’s what auditing is about. It’s about someone listening to you without judgment. They just listen as you get everything you’ve ever had any shame about off your chest.

SF: So far I don’t know much about Judaism. I’m really just learning some of the Yiddish. I’ve yet to delve into that. All I know is I have to do the study otherwise apparently the mum won’t like me.

NP: See, you’ve already got the Jewish guilt down. I think you’re already 75% there.

NP: Looking back on your past two albums, with the benefit of distance and hindsight, what are the thoughts you have?

SF: I can see that I was in pain for both of them, but in a different way. I was rejecting, suppressing and oppressing on the first album, and I was dealing with my problems by deflecting. Then on the second one it was the confronting period. I think I have compassion for myself going through those experiences publicly. I have respect for myself for being vulnerable enough to actually put them out. But I don’t analyze them, and I never listen to them, so I can only really go with what other people tell me they’ve done for them.

NP: But you sing the songs live.

SF: I do occasionally sing songs live form those albums, but I’m not really present for that.

NP: You’re having an out of body experience.

SF: Yeah. I’m doing something else. Me and Elvis are hanging out.

NP: So in the afterlife is it Elvis Presley you want to be hanging out with?

SF: Well I want to hang out with my Grandpa. He was cool. And this drummer that was in my Dad’s band who died when I was about eight or nine from a brain tumor, Joe, he was really good fun. He used to play with me all the time. And who else is dead that was cool? Maybe John Candy and Josephine Baker, I like her. She was the original Angelina. She was the one that made me want to adopt kids. When I was about twelve I saw a TV movie on her, and I was like, ‘I’m going to do that. I’m going to have a rainbow tribe.’

NP: So is that’s in your near future?

SF: Yes. I think within the next two years for sure. I’ll have at least one.

NP: And where would you look to adopt?

SF: I don’t care. I’ll even adopt from here. I don’t need a baby. Apparently siblings are the hardest to place, bi-racial, boy siblings. Maybe I could keep two brothers together.

NP: I think the act of adoption is so unselfish.

SF: I feel that way, but then there’s times… Like maybe I’m falling in love right now, and suddenly I think I would love to go through the experience of carrying a baby and birthing a baby, but I don’t feel in good conscience about it. I just feel that there are so many babies around that nobody is looking after. Or children that are in the system, and the system shouldn’t be raising children. No system should be raising children.

NP: So this could be the last album before you become a mother?