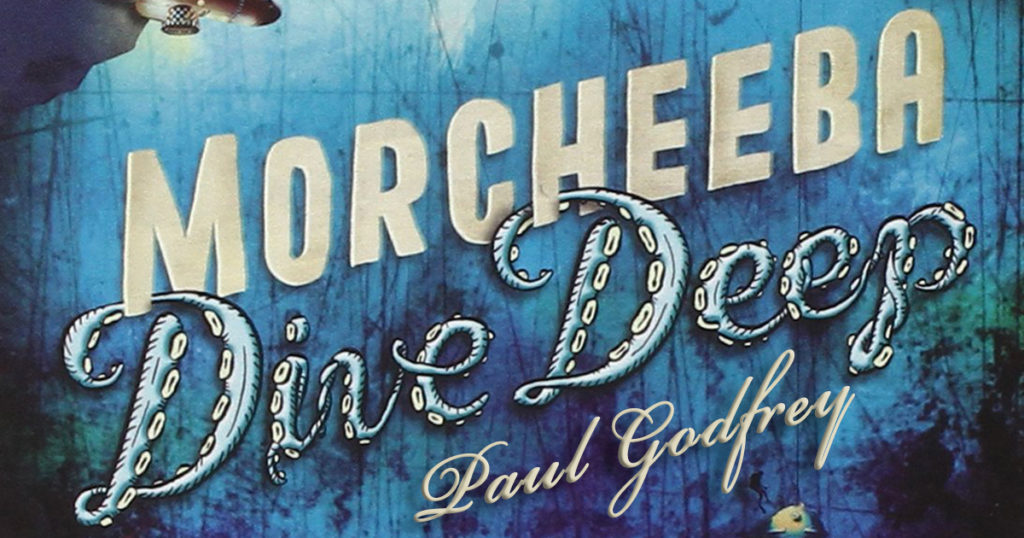 Morcheeba’s Paul Godfrey dives to the depths of depression and surfaces with the band’s best album to date.

“I didn’t realize making sweet music could be such a sour experience,” says Paul Godfrey, who, along with brother Ross, is the constant creative force behind the British downtempo group Morcheeba. The band have sold more than six million chilled out albums worldwide since they started out in the mid-nineties.

Having recorded their first four albums with singer Skye Edwards, the brothers parted ways with their longtime front lady, recruiting Daisy Martey for their next album, The Antidote. But they were again stuck down by LSS (lead singer syndrome), a common condition where the dynamics of a band are strained by the powers exerted by the most focal member (at least as far as the public are concerned). Looking for a more permanent cure, Paul and Ross decided to return to the studio unencumbered, recording their latest full-length release, Dive Deep, with an eclectic selection of singers. The soulful lineup features vocalists recruited via MySpace alongside one-time Elton John protégé Judy Tzuke, who performs on the easygoing, folksy “Just Enjoy The Ride”.

Though writing and recording the album turned out to be an artistically and emotionally freeing experience, it was hard for the pair to get back to the creative grind after the turmoil of the recent past. The pressures of the business of music and the band’s internal strife, coupled with the death of his father, took their toll on Paul, who succumbed to the darkness of depression, which had haunted him since he was a teen. In our exclusive interview, Paul talks about his struggle with the crippling condition, and how he overcame it to produce what we think is quite possibly Morcheeba’s best album to date.

Nicole Powers: In your press release you say that this was the album that restored your faith in music. Talk a little bit about that if you will.

Paul Godfrey: It really did, because I’d just become very impatient with everything. Music at the moment is something that is completely taken for granted, and I think I’d probably started taking it for granted. Actually working on something for so long, and being patient, it kind of restored my faith in the healing power of music.

NP: Because you’d been through the ringer with the whole lead singer situation, and that kind of hassle can take the fun out of a day’s work.

PG: Yeah. When you make a lot of money, you’re successful and you’re working hard, there’s all different pressures from different places. It can split a band up, as it does quite often, so we lost our focus for a bit and it took a while to get it back.

NP: How did you get it back?

PG: I don’t know really. Researching the project. Trying to find the right voices that were incredible but still quite fresh to the ear. I think just spending a lot of time in the studio with the collaborators, and talking about what we were trying to achieve. Just slowly it came together.

NP: So quite literally working through your problems?

NP: Because in your press release you also talk about this album being a depression beating therapy.

PG: I’ve been struck down by depression quite a lot throughout my life. The last time all my energy was completely sapped, and I really burned such a hole that I couldn’t really see myself ever going out of it. It sounds so melodramatic, but I really did feel like I was finished you know. It was quite worrying. It was just a case of little by little trying to do things. I’d have to work for a while and then have a sleep, and then work for a while and then have a sleep, because I didn’t have much energy. Gradually it started to come together, the music actually energized me, and I started to work quite obsessively.

NP: The hardest thing when you are in a depressed place is finding the energy to get up in the morning to even begin the work, and that’s the vicious cycle.

PG: Yeah. Exactly. Then when you feel like that, the slightest thing, someone can upset you, and then that’s it, you just want to go back to bed and say f**k everything. But our studio’s in London, and I live down on the coast, so once I’d actually got myself to London I didn’t have a lot else to do other than work. I guess not having any distractions was good.

NP: Leaving your family behind, and booking producers and musicians and having to be somewhere at a certain time…

PG: Just having to do it. Exactly.

NP: It’s been in the news lately that depression actually serves an evolutionary purpose. There’s a reason why it’s stayed in the chain so long. It’s a mechanism that lets you know that you need to make radical change in your life.

PG: I think that’s the thing, once I’d accepted it, I became more resilient to it. I could kind of work with it. It was when I was fighting it that it was just exhausting me a lot. When I was in denial. Especially in male culture, it’s not really something that men admit, you know, until they’re actually really struck down and they have to see a doctor. It manifested itself as physical pain for a long time. Even now, I still have really shitty days and stuff, but just accepting it and not fighting it I think is really the key.

NP: But in some ways you fought it, because you set aside time in London and began to work. How long did it take to accept it, nurture it, and move on? And what spurred that process?

PG: I think a lot of it this time was caused because I couldn’t make a decision. I felt awful. I couldn’t really balance my family life and my career, because they were two completely different worlds. That was causing quite a big tear inside myself. I think when I accepted that getting back to work would help me out, it did actually make it easier, because I’d made that decision then. Then when I came home I didn’t feel so bad. It is difficult to really understand still, but a lot of it was stemming from the fact that I just had too much on my plate. As you were saying, it was just an indicator of that I was trying to keep too many people happy. It was a lot of anger turned inwards and stuff.

NP: And when you learned you needed to make yourself happy first, then once you get yourself sorted out you’re able to look after the family. It’s the chicken and the egg.

PG: I’d always understood that I had to sort myself out first, but I constantly let it slip and I was constantly just placating people and not putting myself first. And my communication skills weren’t that great, and, as I said, it was a lot of anger turned inwards, and a lot of tension and stuff. When I just thought f**k everybody, and stopped socializing, I stopped doing so much stuff, just doing the music purely, on its own, that did help.

NP: They do say depression spurs creativity. If you look at the list of people who are most likely to suffer depression and mental illness, right at the top there are poets, and then two or three notches down are musicians.

PG: I’ve read a couple of books on the correlation between creativity and depression, and sure enough poets were wracked with it throughout history. I think you’re right, it sort of gets to a point where you just don’t give a f**k about social obligation and all of society’s rules, and without going quite as far as total mental illness, you can kind of step back and see that it’s all kind of a farce really in many ways. Creativity, I don’t know if it’s necessarily correct or not, but it’s just a different way of looking at things.

NP: How’s it manifested in the music and lyrics on the new album? In your song notes you say that “Blue Chair” is about that fact that we all need love and warmth and that we shouldn’t be afraid to give in to our basic need to be nurtured. That sounds like it’s quite a personal song.

PG: Well, yeah. I mean, Judy Tzuke wrote the lyrics, but I suggested the idea. I think another part of my problem is I just try and suffer everything and I find it very difficult to ask for help when I need it because it wasn’t really there as a child. So I’ve sort of created this kind of independent self, which isn’t very real. I think I come crashing down with depression as an extreme from trying to be strong. I’m sort of learning to feel comfortable with my family, and that it’s OK to be intimate.

NP: Talk me through some of the other songs.

PG: “Enjoy The Ride,” that was a really great metaphor because Ross was talking about Griffith Park, near where he lives in California. They shut the gates at sunset and then you can’t get out. You’re locked in. I heard a quote somewhere that ‘the day that you stop running is that day that you arrive.’ It’s learning to accept your feelings and actually let them be present, in your mind, in your body. That kind of worked out really well, I was very happy with that song. Again that’s Judy. We had a big discussion because she suffers from depression as well, and we really bonded over that. It was quite weird. So we were coming at the music from a very similar place. She would like to be positive in the music and I was trying to be dark and more negative. It was quite good, she was sort of pulling me around like that.

NP: It’s weird. With this album the two words I would use to describe it are blissful and melancholic. Those are two opposing things, but they sit side by side on this album.

PG: I think there is a certain pleasure really in allowing yourself to feel bad. I think that’s what the record does. It accesses feelings that it’s really OK to feel. Then when you feel those things you feel whole and human, and ultimately happy I guess.